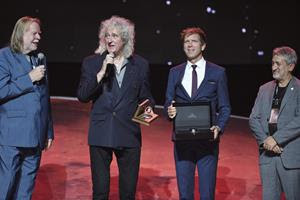 YEREVAN, Armenia, Sept. 06, 2022 (GLOBE NEWSWIRE) — Some of the most influential names in science, music and arts have been named as the latest Laureates of the Stephen Hawking Medal for Science Communication at STARMUS VI festival.

In addition, a special Stephen Hawking Medal will be presented to STARMUS co-founder and Queen guitarist Dr. Brian May at the request of the Advisory Board and petitions of STARMUS alumni, including Nobel laureates, astronauts and science communicators. The award reflects Dr. May’s outstanding contribution to both music and to the public understanding of science.

Brian May was presented with the award by legendary keyboardist Rick Wakeman, who played at a special ‘Sonic Universe’ concert at the festival, alongside System of a Down’s Serj Tankian, astronaut Chris Hadfield and supergroup Sons of Apollo. He also played tribute to Freddie Mercury on stage, on what would have been his 76th birthday.

The design of the medal is a portrait of Professor Hawking by cosmonaut Alexei Leonov, the first man to perform a spacewalk and member of the Advisory Council for STARMUS since its first edition.

The medals will be presented at a special ceremony at STARMUS tomorrow, 6 Sept. 2022.

Professor Garik Israelian, co-founder and director of STARMUS Festival, says, “These medals were created with the support of Stephen Hawking to celebrate those outstanding individuals and teams who honour his legacy in communicating scientific ideas and breakthroughs to inform, inspire and engage the widest possible audience. We congratulate all those receiving medals today as they join the growing list of prestigious Stephen Hawking Medal Laureates.”

Stephen Hawking Medal Winner Diane Ackerman says: “I’m deeply honored and delighted to receive this medal from such a distinguished gathering of curious and creative minds. That Starmus encompasses both the Arts and the Sciences makes it especially meaningful to me, since I’ve always been a writer–in poetry and prose–who is enthralled by the sciences. Science and art share the same spark of curiosity, the same fire of invention.”

Marc Etkind, NASA Associate Administrator for Communications, says: “It is a great honour for everyone at NASA to receive this prestigious award. Our mission at NASA is to explore the unknown in air and space, to innovate for the benefit of humanity, and inspire the world through discovery.”

Stephen Hawking Medal winner Dr. Brian May says, “First of all, I want to pay tribute to Freddie; it’s amazing to receive this extraordinary present on his birthday! Thank you so much to the board; this medal really means so much to me. STARMUS reflects so much about what I passionately believe in, that science and art do not live in isolation; to be a great scientist without being something of an artist, and you can’t be an artist without something of an understanding of the universe we live in. Thank you Stephen Hawking for this medal and award, and Rick Wakeman, for the introduction, as I didn’t know I am that person.”

STARMUS this year is being held in Armenia and dedicated to the 50th anniversary of the first soft landing on Mars by “Mars 3” and the first orbiter “Mariner 9”. “Mariner 9” took the first high-quality images of Mars while “Mars 3” brought the first rover, Prop-M, to the surface of Mars. It was founded to create a platform that unites world-renowned scientists, Nobel Prize laureates, astronauts, and the brightest minds in science, art and technology. The festival enables them to share their experience, knowledge and the latest inventions with attendees, helping to inspire people across the globe to explore the world of science.

Armenia was chosen for its long and impressive history of astronomy, astrophysics and space exploration. For much of the 20th century, it was home to the Soviet space programme, and to this day, it remains a key location for the international community, housing The Byurakan Astrophysical Observatory and the Aragatz Station.

The Stephen Hawking Medal press conference with Laureates will take place at 2.30pm AMT/ 11.30am BST / 6.30am EDT. To request accreditation to join, please email starmus@fourcommunications.com 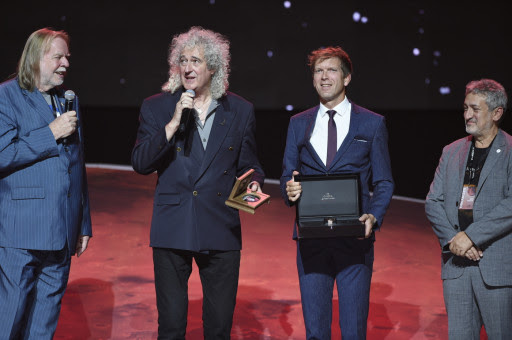