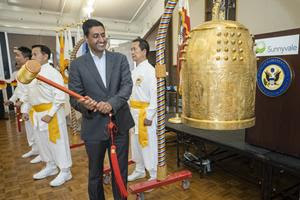 U.S. Congressman Ro Khanna rang the Bell of World Peace and Love and made a wish “to have good relations with all countries working on climate” during a town hall meeting in Sunnyvale, California on August 28, 2022. (AP Images)

SAN JOSE, Calif., Sept. 02, 2022 (GLOBE NEWSWIRE) — “I am very touched and I think it’s a celebration for all of us, for our community, in service of peace and the goals and values we all share,” stated U.S. Congressman Ro Khanna after he rang Tai Ji Men’s Bell of World Peace and Love. Witnessed by hundreds of people, Congressman Khanna rang the Bell and made a wish “to have good relations with all countries working on climate” during a town hall meeting in Sunnyvale, California on August 28, 2022. Tai Ji Men was invited to host the ancient and sacred bell-ringing ceremony, enabling the congressman’s wish to spread around the world through the peaceful sound of the Bell, ending the gathering on a very positive note.

That also marked the culmination of Tai Ji Men Qigong Academy San Jose’s 21st anniversary as it just held an anniversary celebration in Saratoga that afternoon. Over 150 community leaders and people got together to connect and consolidate their kind thoughts and happy energy. There were also congratulatory messages and videos from friends and members of Tai Ji Men in 22 nations. The event was live streamed in Chinese and English, with thousands of views.

The celebration began with a beautiful cultural performance—a jovial auspicious lion dance and an uplifting celestial drum performance, which electrified the whole room and infused the attendees with tons of happy energy to alleviate the fear and anxiety caused by the pandemic.

Dr. Hong, Tao-Tze, the leader of Tai Ji Men, delivered welcome remarks, emphasizing, “In the post-pandemic era, we need to maintain a healthy body and mind to cope with constant changes in the environment, apply our conscience, and carry out good deeds in everyday life to help global citizens stay mentally positive. I would like to encourage everyone to make decisions guided by conscience, stay calm, develop great wisdom, take love as a driving force, and unite as one. I wish for the end of wars and the pandemic. Let’s create a beautiful and sustainable future together!”

Over the past 21 years, the academy has been actively promoting a culture of conscience, love, and peace locally, nationally, and globally. In appreciation of its outstanding contributions to their communities and the world, many community and political leaders as well as international scholars participated in the event in person or by sharing a video message.

Dr. Hong presented to each of the distinguished guests a Compass Clock of Conscience, which has a profound meaning as it represents time, direction, and goal, guides people toward the right path of life, and reminds them to seize every moment to follow their conscience and do good deeds to achieve a sustainable future of love and peace.

On behalf of Congresswoman Anna Eshoo, Justin Jeong, the field representative at her district office, extended her most sincere and special congratulations to Dr. Hong and Tai Ji Men Qigong Academy San Jose for its 21st anniversary. “Thank you for everything that you guys do for the community and to spread your mission of promoting health in both the physical, mental or spiritual,” he said, emphasizing, “I do have to say that Congresswoman Eshoo is very supportive and loves everything that the Academy does.”

Fremont Mayor Lily Mei presented a certificate of recognition to Dr. Hong, Tao-Tze, the leader of Tai Ji Men, congratulating and commending Tai Ji Men. She stated, “I think right now, more than ever, we need people to have a compass, for kindness, for compassion, for our community. And I wish you all continued blessings of peace and wellness, which is so important in this moment.”

Palo Alto City Mayor Pat Burt stated, “As I have listened to the comments, it has reminded me of a famous saying from a speech that President Kennedy made more than 50 years ago. And in it, he said: we all breathe the same air, we all share the same small planet, and we all cherish the future of our children. And this is what I think your celebration and your organization is doing much to promote. In this era, where sustainability and climate change and peace among nations is so important and so threatened, we must all work together for these problems.”

On behalf of the Milpitas City Council, Vice Mayor Carmen Montano and Juliette Gomez, a candidate for Milpitas City Council, congratulated the academy and presented a commendation to Dr. Hong, Tao-Tze, the leader of Tai Ji Men. Vice Mayor Montano said, “Tai Ji Men Qigong is the practice of finding balance between body and mind, and to cultivate a higher level of consciousness, physical and emotional health, as well as spiritual enlightenment.”

Cupertino City Councilmember Hung Wei stated, “We are very honored to represent the City of Cupertino to congratulate Dr. Hong and Tai Ji Men Qigong Academy for 21 years of service, not just for the youth, but also for the adults to bring health, wealth, wisdom, happiness and joy to all members of our community.”

At the celebration, Tai Ji Men members shared how practicing qigong has improved their health, parent-child relationships, family life, and other aspects of life, as well as their experiences of serving their communities and spreading love to the world. In response to their sharing, Cupertino Vice Mayor Liang Chao stated that with the ongoing pandemic, many people are facing mental health issues and social isolation, adding, “I think a lot of them would need the service that Tai Ji Men is providing.”

To commemorate the academy’s 21st anniversary in the 21st century, a solemn ancient ceremony of ringing the Bell of World Peace and Love was conducted. Dr. Hong, Tao-Tze, the leader of Tai Ji Men, rang the Bell and made three wishes: for everyone’s conscience to awaken, for love and peace to prevail, and for the world to unite as one. The peaceful sound of the Bell spread from Silicon Valley, the world’s leading technology and innovation hub, to awaken the conscience of global citizens, inspiring them to follow their conscience, protect the environment, and ensure global sustainability as they advance technological development!

On this special occasion, a video was played featuring the highlights of Tai Ji Men’s recent ceremonies of ringing the Bell of World Peace and Love. On August 26, California State Senator Dave Cortese rang the Bell at Tai Ji Men Qigong Academy San Jose and made a wish “for peace among every nation” as he congratulated the academy on its 21st anniversary. He presented to Dr. Hong a State of California Senate Certificate of Recognition, which reads, “Senator Dave Cortese hereby recognizes and commends Tai Ji Men Qigong Academy for twenty-one years of service for providing education physical, mental and spiritual health in California’s District 15 and promoting the culture of peace with love and conscience worldwide.”

As of August 2022, a total of 427 influential leaders from 128 nations have rung the Bell, including 49 heads of state and government, seven Nobel Peace Prize laureates, UN ambassadors, and other leaders from all walks of life, exerting their positive influences to transform the world.

The event also featured a story told by Prof. Massimo Introvigne, an Italian sociologist and the managing director of the Center for Studies on New Religions, at a gala dinner in Vienna, Austria in October 2019 to celebrate the United Nations’ adoption of the International Day of Conscience. He was very touched by Tai Ji Men’s cultural performances there and related this profound story: The Buddha came across a burning house with three young people inside who were unaware of the situation. Despite his desire to save them, the Buddha realized that trying to reason with them would be pointless because they wouldn’t understand. He lured them to escape the burning house by providing three beautiful chariots for them to board, and they did so, thus saving themselves. Prof. Introvigne emphasized, “Our world is burning. There is a lot of smoke, a lot of fire. We are at serious risk to die. We do not realize it. If somebody were to talk to us, we will not understand. That is exactly the mission of Dr. Hong and Tai Ji Men.” “Let’s board the chariot Dr. Hong is offering to us. Let’s board the chariot and get saved. I believe that is the lesson of the Day of Conscience. That is the lesson of Tai Ji Men.” This video gives Prof. Introvigne’s interpretation of why over the past 20 plus years Tai Ji Men shifu (master) and dizi (disciples) have been encouraging the people of the world to activate their conscience, do good deeds, and board the beautiful chariots together to escape danger and move toward a beautiful world of love and peace.

To promote a culture of conscience, Tai Ji Men invited the attendees to join millions of others to endorse several declarations on peace and conscience. To date, the Declarations for Human Rights of World Citizens and Peace have been endorsed by over 3.7 million people in 200 nations, and a CD with two million signatures was submitted to the UN in 2004. The Declaration for the Movement of An Era of Conscience and the Declaration of International Day of Conscience have been signed by over 330,000 people in 200 nations. All are encouraged to endorse these meaningful and positive declarations, watch the anniversary celebration online and take conscience-driven actions to improve themselves, their communities, and the world!

Tai Ji Men Qigong Academy: Tai Ji Men is an ancient menpai (similar to school) of qigong, martial arts, and self-cultivation. It has carried forward the wisdom of Taoist philosophy, one of the highest philosophies of humankind. It is an international nonprofit cultural organization. Its contemporary zhang-men-ren (grandmaster), Dr. Hong, Tao-Tze established the Tai Ji Men Qigong Academy in 1966, and since then it has grown to 15 academies worldwide.

Dr. Hong teaches his dizi (similar to disciples) methods to achieve physical, mental, and spiritual balance, and tens of thousands of families have benefited from his teaching. At Tai Ji Men, martial arts and wisdom have been passed down from the shifu (master) to his dizi. Through this time-honored tradition, the shifu and dizi promote the Tai Ji Men culture and martial arts around the world while embodying what is true, good, and beautiful as well as spreading the ideas of conscience, love, and peace. Over the past half-century, the shifu and dizi have self-funded trips to over 300 cities in 101 nations to conduct more than 3,000 cultural performances and exchanges and have been recognized as “International Ambassadors of Peace and Goodwill.”

A photo accompanying this announcement is available at https://www.globenewswire.com/NewsRoom/AttachmentNg/3abc5b05-9807-4f27-bbda-fa7625bc7537

The photo is also available at Newscom, www.newscom.com, and via AP PhotoExpress.